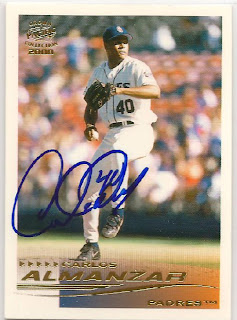 Over at baseball-reference.com the words most commonly associated with Carlos Almanzar are Granted Free Agency. He was signed as a amateur free agent in December 10 by the Toronto Blue Jays. The Jays traded him to the Padres with Peter Tucci and Woody Williams for Joey Hamilton. In 2001 the Padres traded Almanzar to the Yankees for David Lee. Now follows the reason for the title, he was granted free agency four times between 2002 and 2006, signing with the Rockies, Reds, Rangers and Braves. He played in the majors with the Jays, Padres, Yankees, Reds, and Rangers. He finished his career with a 13-13 record and a 4.82 ERA. He hasn't made an appearance since 2005. He appears here on a 2000 Pacific Collection card, I purchase the card on ebay.
Posted by Rod (Padrographs) at 8:07 PM