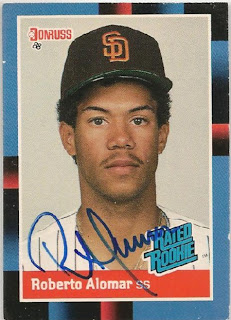 Roberto, Sandy Sr. and Sandy Jr. have all worn the brown and orange of the 1980 era Padres at one or another. He was signed as a amateur free agent by the Padres in 1985 and played his first major league game in 1988. He played for the Padres until 1990 when he was traded to the Jays. He also played with the Orioles (remember his confrontation with Umpire John Hirschbeck), the Indians, Mets, White Sox and Diamondbacks. He signed as a free agent with the Rays in 2005 and retired from the Rays later that year. He played in 2 World Series, named to the All Star squad every year from 1990-2001, was awarded 10 Gold Gloves and won 4 Silver Slugger Awards. He got to play with his brother Sandy in Cleveland. I remember I got his brother Sandy to sign a picture of he, Roberto and their Dad at a game here in Portland and then I mailed it to Sandy Sr. to sign and it came back also signed by Roberto. I got this 1988 Donruss Rated Rookie signed through the mail a long time ago. My sons and I got an autograph from Sandy Sr. outside Civic Stadium in Eugene, Oregon when he was a roving instructor with the Cubs I think.
Posted by Rod (Padrographs) at 4:43 PM