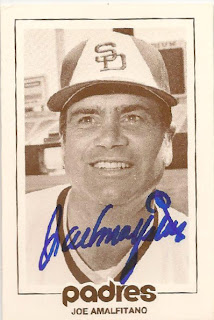 Joe Amalfitano played from 1954 to 1967 for several teams including the New York Giants, the San Francisco Giants, the Houston .45's and the Chicago Cubs. His travels include several stops with the Giants, he was originally signed as a bonus baby by the New York Giants in 1954, then released by the Giants in 1958, then drafted by the Giants in the 1959 rule 5 draft, in 1961 he was drafted by the Colt .45's in the expansion draft. In 1962 Houston traded Joe to the Giants for Dick Lemay and Manny Mota. In 1964 the Cubs purchased his contract from the Giants and then released him in 1966, in 1967 he was resigned by the Cubs and then released again by the Cubs. In 1977 he was a coach with the Padres and featured on this team issued schedule card. I got it years later through the mail.
Posted by Rod (Padrographs) at 9:28 PM