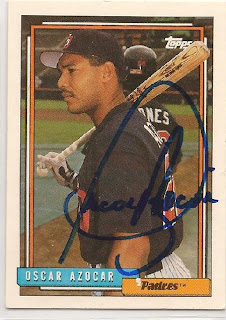 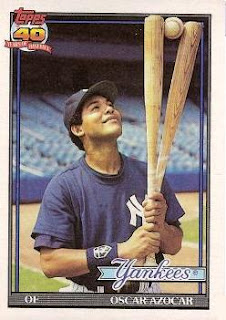 Oscar didn't play long anywhere, but I will always remember him because of the card on the right. He recreated the pose on a Padres Keebler card. He was signed by the Hankies as an amateur free agent in 1983, when he was 18 years old. He finally made it to the majors in 1990 playing part of one season with the Hankies. In December of 1990 he was traded to the Padres for Mike Humphreys (who?). He played two seasons in San Diego never playing more than 99 games. He was granted free agency as soon as the 1992 seasons was over. His career batting average was .226. I got this card on ebay.

I remember watching Azocar play with the Yankees. He was supposed to be a "future star," but it didn't quite work out that way.

Still, that's a pretty awesome photo on the 1991 Topps card.