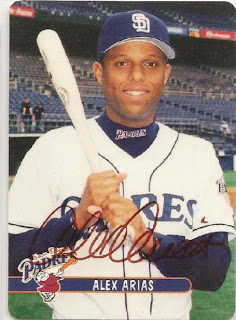 Alex Arias has a World Series ring, unfortunately it wasn't with the Padres. He played 11 seasons in the majors between 1992-2002. He was drafted by the Cubs in the 3rd round of the 1987 draft, he played part of the '92 season with the Cubs before being traded to the Marlins. He played 5 seasons with the Marlins, and was part of the Marlins 1997 World Series team. After that season he was released by the Marlins and signed as a free agent with the Phillies, he played three seasons and was released. The Padres signed him as a free agent in December of 2000 and played in 158 games for the Padres. At the end of the 2001 season he, Ben Davis and Wascar Serrano were traded to the Mariners for Brett Tomko, Tom Lampkin, Ramon Vazquez and cash. He then then signed as a free agent with the Orioles and Yankees. He never played a game for the Mariners or Orioles and only 8 games for the Yankees in 2002. I got the 2001 Keebler card signed through the mail. I wish the team still did some sort of team issued set like this, but they haven't for several years.
Posted by Rod (Padrographs) at 1:59 PM

The name Arias translates to Lions. So in the case of Alex and George, pussycat is more fitting.