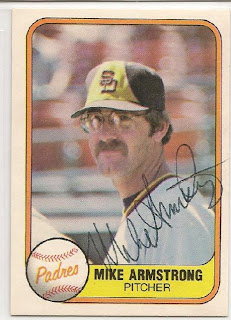 What do you when you retire at age 33? Mike Armstrong pitched for 8 years in the major leagues and was done with that career when he was 33. He is younger than many people I know who are still years away from retirement. What do you do after that? I wonder if any one has a where are they now blog on baseball players.

Mike was drafted by the Indians in the 9th round of the 1972 draft but did not sign. Mike must have had a good year at the University of Miami, because he was drafted by the Reds in the 1st round, with the 24th pick in 1973. In 1979 the Reds traded him to the Padres for Paul O'Neil (yes, that Paul O'Neil) . In 1982 the Royals purchased his contract from the Padres, then in '83 the Royals traded him to the Hankies for Steve Balboni. In '86 NY released, resigned him and released him in 87. He finally signed with Cleveland in 1987, 15 years after they originally drafted him. He pitched for the Padres, Royals, Yankees and Indians finishing his career with a 19-17 record and an ERA of 4.10. I got this 1981 Fleer card from ABC unlimited.
Posted by Rod (Padrographs) at 6:47 PM