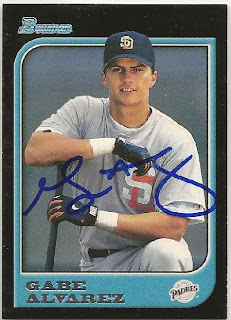 Gabe Alvarez was drafted by the Padres in 1995 but didn't play for them until 2000. Gabe is a native of Mexico, and he played his college ball at the University of Southern California. He was drafted in the 2nd round of the 1995 amateur draft. Then in the 1997 expansion draft the Diamondbacks chose him as the 5th pick. The Diamondbacks traded he, Matt Drews and Joe Randa to the Tigers for Travis Fryman. Then in 2000 he was traded to the Padres. He played in a whopping 11 games for the Padres, he got 23 at bats. He played 3 seasons in the minor leagues never getting above AA. He played in the systems of Cinncinati, Milwaukee and the White Sox. I got the card through ABC Unlimited.
Posted by Rod (Padrographs) at 9:43 PM