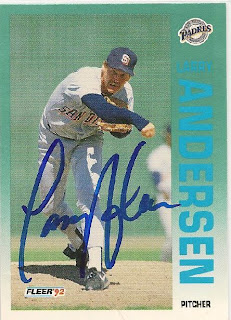 Larry was someone whose career I had followed because he is from my hometown. I think that is the first time I have ever called Portland my hometown. I am 51 years old and have lived here for 27 years, but never claimed it as my hometown. I was born in Long Beach, CA and then moved every two years until my sophomore year in high school, going to 10 schools in 12 years in 4 states. Eventually I followed my family here and settled here. Portland is my hometown.

Larry is also famous for wondering if Styrofoam is packing material how do they ship it. Larry is just 4 years older than I am put has been retired for the last 14 years and I still have at least 14 years to go before I retire.

Larry Andersen played 17 seasons between 1975-1994 for the Indians, Mariners, Phillies, Astros, Red Sox, and the Padres. He pitched in two World Series ten years apart in '83 and '93 for the Phillies. He finished with a 40-39 Won-Loss record and a 3.15 ERA. I got the card signed through the mail, after he retired, by using one of the many address list out there.

"You're only young once, but you can be immature forever." Larry Andersen
Posted by Rod (Padrographs) at 7:21 PM