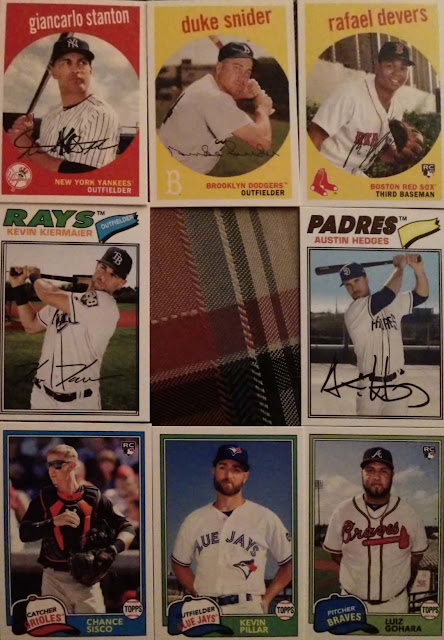 The first pack of 2018 Archives to come out of the Christmas box features a Hall of Famer, a Padre and a possible Hall of Famer in a another ten or fifteen years.
Giancarlo Stanton, has played nine seasons in the major leagues and is a four time All Star, has over 1,100 hits and over 300 home runs.
Duke Snider, signed a volleyball which is in the collection of NightOwl, he was inducted into the Hall of Fame in 1980. Austin Hedges is one of the many catchers in the Padres system.  I like all three years that they used last year but I wish they would use the 1988 template.
Posted by Rod (Padrographs) at 7:42 PM

Nice pull. Devers is still young and the Red Sox are still high on him.

Been waiting for Hedges to blossom into the player many of us hoped he'd become. Maybe 2019 will finally be his breakout season.