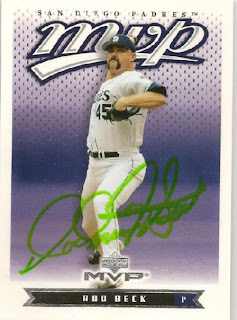 Rod Beck was a formidable presence on the mound bent over, arm swinging, glaring at the batter, with that big old fu manchu. He and Goose convinced me that I should grow one so I had one, back when my beard and stache were black instead of the white they are now. Rod has two spots in my collection, one in the cards of guys named Rod (that I forgot I had until just now) and in Padrographs.

Rod Beck was drafted by the A's in the 13th round of the 1986 draft. In 1988 he was traded to the Giants for Charlie Corbell, and made his major league debut in 1991 with the Giants. He pitched for 6 seasons with the Giants until they granted him Free Agency in 1997. In '98 he signed with the Cubbies and pitched a season and a half in the friendly confines before being traded to the BoSox in 1999. He was traded to Boston for Mark Guthrie and Cole Liniak. After pitching two and a half seasons at Fenway he was again granted free agency in '01. In 2002 he was signed by the Cubs after having Tommy John surgery, he pitched at their AAA affiliate and lived in a Winnebago behind the stadium. In 2003 and '04 he pitched for the Padres at one point filling in for Hall of Famer Trevor Hoffman (cue either AC/DC or Padres fans crying, your choice).

I mailed several cards to Rod Beck after he played for the Padres, I don't remember where I sent this one. I told him how he was in two parts of my collection and that we shared the same first name, Rodney. I told him I was named for my grandpa and asked him who he was named for, he didn't answer that particular question but I do believe that he signed his full first name. I sent him the odd colored sharpie that he signed. I know a lot of collectors believe that cards should only be signed in blue or black, but I am strange I like a lot of colors in my collection. Rod Beck was found dead in his home in Phoenix, AZ, he was 38. He was buried in his Cubs uniform.
Posted by Rod (Padrographs) at 7:59 PM

Wow! I didn't even know he had died. Where the heck was I when that happened? Great post! Love the colored ink!

I didn't he was buried in his iniform. That's pretty cool.

That's a pretty long signature for such a short name.