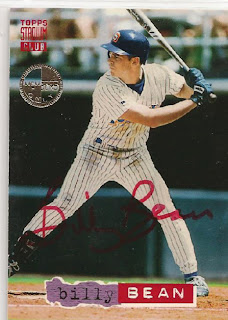 This was one of the most difficult autos I have ever obtained through the mail. I had mailed requests to Mr. Bean using addresses through Smallings' and Musselmans'list. I read his book and wrote to his publisher, then I found a way to email him and emailed and explained that I was a Padres collector and was only getting the auto for myself, telling him how extensive my collection was. He emailed me and told me that he would sign it for me. I sent him the card, the sharpie and the self addressed stamped envelope and he signed it and here it is.