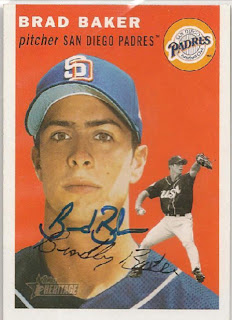 He has played all over the United States, but hasn't made it to the show yet. He is coming off his ninth minor league season and has a career 44-40 record with a 3.98 ERA. He has been in the Red Sox, Padres, Braves and Twins organizations. He spent two years playing in Portland, having played at every level in the Padres organization and at AAA for the Braves, Sox, Twins and Padres. I remember sending this card to him when he was here in Portland.

If you want to see some really interesting cards I suggest you head over to Thorzul will Rule and see the interesting cards that won his halloween contest. These are truly awesome, wish I had a talent like that so I could make me a Dirk Hayhurst card.
Posted by Rod (Padrographs) at 9:49 PM