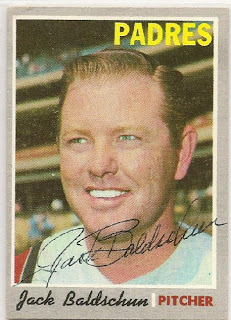 I got this card from ebay, but I have another one somewhere that I got through the mail. Jack is a generic card with the Padres name on it. The 1970 card still shows him wearing a Reds uniform, where he played in 1969. It is card #284, which is pretty good considering that Jack didn't sign with the Padres until after the season had started.

Jack was originally signed as a amateur free agent before the 1956 season by the Washington Senators, before they left the nations' capitol (Hope you voted) again for greener pastures. Somehow he got to the Twins organization and then in 1960 the Phillies got him from the Twins in the Rule 5 Draft. He made his major league debut in 1961 and played 5 seasons for the Phillies. On December 6,1965 he was traded to the Orioles for Jackie Brandt and Darold Knowles, three days later he, Milt Pappas and Dick Simpson were traded to the Reds for Frank Robinson. He played two seasons for the Reds before being released by the Reds. He was signed by the Padres as a free agent in 1969 and pitched that year and part of the 1970 season before being released.
Posted by Rod (Padrographs) at 3:39 PM