End of the Month oddidty 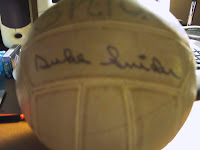 I have a friend who is a former Marine who is a friend of my father-in-law. Harry Moss used to be stationed in Southern California and the family lived in Fallbrook, CA and lived near Duke Snider. One of Harrys' daughter played volleyball in high school and one of her coaches was Donna Snider. Harry knew Duke was a Hall of Famer and they had become friends, so Harry asked for an autograph. He didn't want it on a baseball and wanted something different. Duke said he had signed a couple of gloves, a few bases, a lot of bat, balls and cards, but had never signed a volleyball. Besides Dukes' signature Donna Sniders' name is also on the volleyball. I can't find a good way to display this. Has anyone out there ever seen Dukes' signature on a volleyball before.

I think that on the end of the month I will do an odd autograph from my collection. Next month will be an autograph from Mike Hargrove that involves a Marvel Superhero. What is the oddest thing you have signed?
Posted by Rod (Padrographs) at 5:37 PM

That is definitly a unique autograph, and no, I have never seen his signature on a volleyball before.
I really don't have a unique signature item. I have a Riddell mini baseball helmet signed and a pennant and a book, but that's about it.
I was at a William "The Refrigerator" Perry signing this summer and some guy got him to sign the door from his mini-fridge.
I just got the Duke's autograph through the mail this past month. He has a nice looking signature.

I forgot. I have a Steve Busby autographed bobblehead. You still have me beat, though.