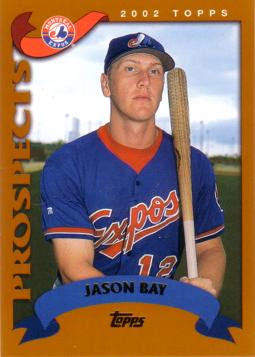 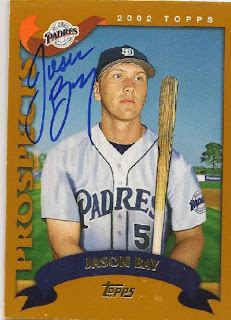 Jason Bay has fulfilled his father's dream. He told the Boston Media that his father had bought a Bosox onsie when he was born. His bedroom had posters of Yaz and Jim Rice when he was growing up.

He was drafted by the Expos in 2000, in March of 2002 he was traded to the Mets with Jimmy Serrano for Lou Collier. Then in July of 2002 he along with one of the Bobby Jones' and Josh Reynolds were traded to the Padres for Steve Reed and Jason Middlebrook. In August of 2003 after playing in just 3 games for the Padres he was traded along with Oliver Perez and Corey Stewart to the Pirates for Brian Giles. He was named National League Rookie of the Year in 2004. During the 2008 season he was traded to the Red Sox and was a crucial part of the Bosox drive to the playoffs. He was named to the All-Star game in 2005 and 2006, although he didn't play in the 2005 game. Jason has a sister who is a professional softballer and played for Canada in the 2004 and 2008 Olympics.

This 2002 Topps card is one of the worst examples of airbrushing since the 1960's. I got this signed through the mail when Jason played here in Portland in 2003.

After I originally posted this someone told me about Jasons' regular card for Topps in 2002 and when I went looking I found this other wonderful examples of laziness on Topps part.
Posted by Rod (Padrographs) at 7:50 PM

I didn't even know that Bay was ever a Padre. My first thought when I read the title was "Is that the same Jason Bay that I'm thinking of?".

Is this an update/traded card? I could swear the 2002 Topps Bay card I have has him in an Expo uniform.

It is a traded card. It looks like they took the regular card and just airbrushed it. He also has a 2002 card Heritage card as a Met, which looks the same picture airbrushed again

That's incredible. I have seen evidence of their PhotoShop tactics lately, but I figured the airbrushing pretty much ended in the early 90's.

Bay and Xavier Nady were pretty fun to watch as Portland Beavers.