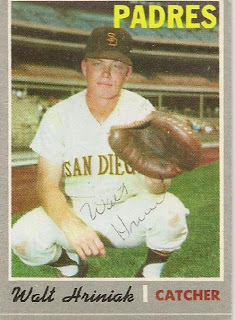 You learn something new every day. I thought for all the press that Hriniak got during the '80's and early '90's as a hitting guru that he must have been a long time, .300 or better hitter. Well he only played two seasons in the majors, and was a career .253 hitter. He was signed by the Milwaukee Braves in 1961 as an amateur free agent. He was a minor leaguer til 1968. He was severly injured in a car accident in 1964 which which resulted in the death of one of his teammates. He spent three months on the DL. He was finally called up by the Braves, who were now in Atlanta, and played in 9 games. In 1969 he played 7 games for the Braves, before being traded to the fledgling Padres with Andy Findlay and Van Kelly for Tony Gonzalez. He played 31 games with the Padres in 1969 and that was the end of his playing career. He stayed in the Padres organization for 2 more years before he was traded to the Braves for Rick Wilson. He played in the Braves system for a short time before being released and signed by the Expos as a free agent during the 1971 season. During the 1968 season he was at Shreveport where he was managed by Charlie Lau, another hitting guru. Hriniak adopted Laus' philosophy and began to teach it. He was hired in 1984 by the Red Sox as a hitting instructor and began to mentor hitters, including Hall of Famer Wade Boggs. He went to the ChiSox in 1989, where he taught the Big Hurt, Frank Thomas, his philosphy. He coached until 1995 when he opened a hitting school and became a private hitting instructor. He is pictured here on a 1970 Topps card, a year he didn't even play in the majors. I got this card from ABC Unlimited.
Posted by Rod (Padrographs) at 10:44 AM

I find it interesting that Hriniak was a catcher. I didn't know that. Catchers seem to be able to make an impact in coaching no matter what. Of course there are all the ex-catchers managing (Scioscia, Bochy, Girardi, etc.). And even a very well respected pitching coach (Dave Duncan).