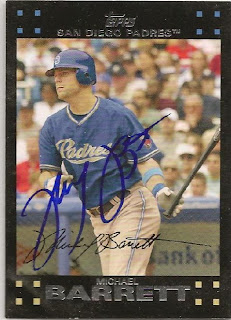 Michael Barrett suffered one of the freakiest injuries I have ever seen. July 2, 2008 he fouled a pitch off his face, he was rushed to the hospital and underwent surgery to repair the bones in his face. 2008 was an injury filled year for Mr. Barrett, he suffered a concussion and an elbow injury in addition to the facial injuries.

He was drafted in 1995 by the Montreal Expos, remember them, and made his debut with them in 1998. He played for them until he was traded to the A's for Bret Price on December 15, 2003 and later that day he was traded from the A's to the Cubs for Damian Miller and ca$h. Less than a week later he was granted free agency on 12/21 and on 12/21 he signed as a free agent with the Cubs. After his disagreement with pitcher Carlos Zambrano was broadcast around the nation he was traded to the Padres for Rob Bowen and Kyler Burke. After he was traded to the Padres he had a poor season filled with injuries and his lowest career numbers. I believe that I got this 2007 Topps card in the mail while Mr. Barrett was recovering from one of his many injuries.
Posted by Rod (Padrographs) at 1:48 PM