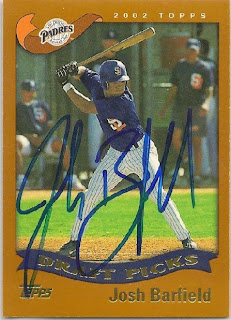 My son and I went to the final game of the 2005 Portland Beavers season. As we boarded the light rail to go home we saw two young men with their suitcases waiting to board the train to go to the airport. I thought they looked familiar so I looked at their luggage tags and they were who I thought they were. It was Josh Barfield and Brad Baker heading out of town. We asked them it they thought they would be back next season, both said they didn't know. Baker was traded to the Braves and Josh spent the 2006 season in San Diego, before he was traded to the Indians for Kevin Kouzmanoff and Andrew Brown. There was a loud outcry, because Josh had a good year and had become a fan favorite.

He was drafted by the Padres in 2001 in the 4th round. I got the 2002 Topps card signed by Josh during the 2005 season at PGE Park. One advantage of having a AAA franchise in town, especially nice that it is the AAA affiliate of your favorite team.
Posted by Rod (Padrographs) at 10:09 PM