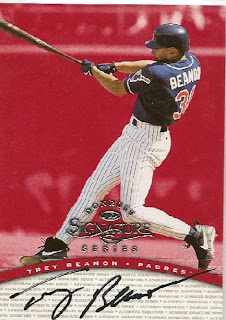 Trey Beamon was drafted in 1992 by the Pittsburgh Pirates in the 2nd round of the draft. He made his debut in 1996 and played in 24 games. In March of 1997 the Pirates traded him with Angelo Encarcion to the Padres for Mark Smith and Hal Garrett. He played 40 games in the outfield for the Padres batting .277. In November of '97 the Padres traded him to the Tigers with Tim Worell for Dan Miceli, Donne Wall and Ryan Balfe. After a season in Detroit Trey was released and has since played in the minors and in several independent leagues. He was a United League Baseball All Star in 2006. I got the Donruss Signature card from a dealer on ebay.
Posted by Rod (Padrographs) at 8:45 PM