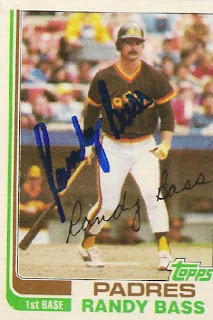 This man challenged a national home run record and is now a State Senator in his native Oklahoma.

Randy Bass was drafted in 1972 by the Twins and made his Major League debut as a September call-up in 1977. He was purchased by the Royals in 1978, he was then purchased by the Expos in 1979. Then he was traded to the Padres for John D'Acquisto and cash. He played 2 and 1/2 seasons in San Diego, part way through the '82 season he was claimed off waivers by the Rangers. Then he 1983 he went to Japan where he played for 6 seasons for the Hanshin Tigers. He took the Tigers to victory in the Japan Series in 1985. In 1986 he hit .389, a record that stills stand, Ichiro came close in 1994 and 2000. In 1985 he came one home run short of breaking Sadaharu Oh's single season home record of 55. In the last game of the season Oh's pitchers intentionally walked Bass every time he came to the plate. Bass returned to his native Oklahoma and became active in community affairs, and in 2004 he was elected as a Democratic state senator. He was re-elected in 2006 and serves on prestigous committees. I got the card from ABC Unlimited.
Posted by Rod (Padrographs) at 8:24 PM