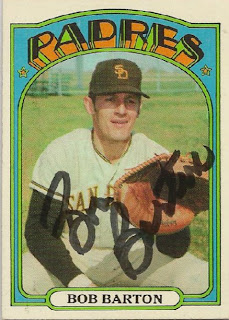 Bob Barton hit .571 his first year in the major leagues, he went for 4 for 7 in his first year with the Giants. The Giants signed him as an amateur free agent before the 1959 season. He played for the Giants through the '69 season. After the season he was traded to the Padres with Bobby Etheridge and Ron Herbel for Frank Reberger. He played through '72 in San Diego then was traded to the Reds for Pat Corrales. He only played in 3 games for the Reds and was released. He signed in April '74 with the Padres and played in 30 games. The Padres released him after the '74 season. It looks like Bob is posed in the middle of a cattle pasture, nothing for miles but more open land. He is wearing one of the more sedate the Padres wore during the 1970's. I got the 1972 card through ABC Limited.
Posted by Rod (Padrographs) at 4:56 PM