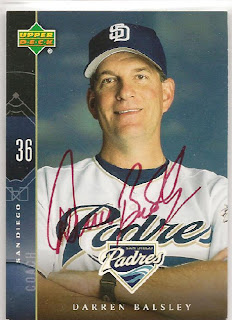 Evidently you can go home again, and do well. Darren Balsley graduated from San Diego's Mt. Carmel High, went away to college and then played six years in the minor leagues before returning to be the pitching coach for the Padres. He took the job in 2003 and took the Pads to having the league leading team ERA in 2007 in all of the major leagues.

Darren was drafted in the 3rd round by the A's in 1984. He then embarked on a tour of the west smallest towns', Idaho Falls, Modesto and Pocatello. Then in '86 the Jays took him in minor league draft and he spent a couple of years touring the deep south, pitching in Dunedin and Knoxville. He finished by going 3 for 3 in Knoxville in 1989.

Then he became an advance scout for the Blue Jays before becoming a coach at some of the places he had just played. In 2003 he was named the pitching coach for San Diego where he has coached many of the pitchers to a marked improvement and lowered the team ERA.

The card was a giveaway at the stadium in 2004 produced by Upper Deck. It included all the coaches and the complete 25 man roster. I wish the Padres would do something like this every year, I would like to have a card of Glenn Hoffman in a Padres uniform. I sent this to Darren in '05 and got it right back.
Posted by Rod (Padrographs) at 8:01 PM

Hi Rod. As a fellow autograph seeker, I really love your blog. I don't know if you saw them or not, but I left a few comments on some of your earliest posts.
Our blogs are pretty similar. We both post one autograph a day. You go in alphebetical order while I go in chronological order. I'm adding you to my blog roll and would appreciate it if you added me to your's.

Keep up the good work.