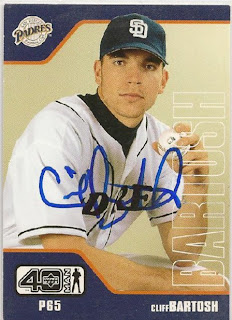 Another player who never played a down, I mean never spent a second on the court, never skated or even made an appearance for the Padres. Cliff Bartosh was drafted in the 29th round of the 1998 draft by the Padres. He played in the Padres organization from 1998 to 2003 starting in the Arizona Rookie League at Peoria and ending at PGE Park in Portland in 2003. In October of 2003 the Tigers claimed Cliff off waivers from the Padres, in December of 2003 the Indians claimed him off waivers from the Tigers. In 2004 he pitched situationally for the Indians in 34 games and in 2005 he was traded to the Cubs for Ronald Bay. He appeared in 19 games for the Cubs.

I got this Upper Deck 40 Man card from a dealer on ebay. I wish the card companies would still do sets like this and Topps Total. Complete teams and a good surface to sign on.
Posted by Rod (Padrographs) at 5:59 PM

I miss Upper Deck 40-Man and Topps Total, too.

The '52 Rookies sets Topps did the past two years were better than nothing, but they only included obscure rookies. I know I'm a bit odd, but I like to see all of the players -- no matter how obscure -- get at least one card per year.

If I can get it signed without having to prepare the surface, so much the better. :)