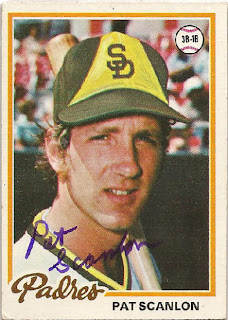 In 1978 I turned 21, was cruising through the Western Pacific courtesy of Uncle Sam and throughly enjoying crossing the equator this time. Having become a trusty, crusty shellback two years earlier, I had the distinct pleasure of shepherding the ships' captain, who was a slimy polliwog through the shellback iniation ceremony.  Those of you have been there know how much fun that could be, those of you who are still slimy polliwogs can only imagine the fun.
Pat Scanlon was drafted by the Expos in 1970 and played three seasons for them before being traded to the Cardinals after the 1976 season.  During spring training of 1977 the Cardinals traded Scanlon and John D'Acquisto to the Padres for Butch Metzger.  He played in 47 games for the Padres in 1977, after which he never made it back to the majors.  He split 1978 between AAA Hawaii for the Padres and AAA Denver for the Expos.  He played in AA for the ChiSox and Expos in 1979 and 1980.  I got this 1978 Topps card signed through the mail.
Posted by Rod (Padrographs) at 11:11 AM