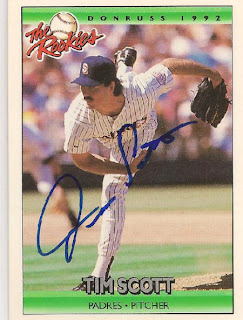 In 1992 I was working at the local card store and learning that peoples' perception was often their reality.  People would ask us, for example, who wore 7 for the Yankees.  We would tell them it was Mickey Mantle and they would insist that it was someone else.  I would encounter this over and over in the seven years that I worked at card shops.
Tim Scott was one of the harder autographs I got.  I chased him through multiple addresses using Smalling and Harveys' address list.  He was drafted by the Dodgers in 1984 and made his major league debut in 1991 with the Padres.  He pitched for the Padres from 1991 to 1993 before being traded to the Expos.  He then played for the Giants and Reds before returning to the Padres in 1997.  He also spent part of 1997 with the Rockies.
Posted by Rod (Padrographs) at 6:13 AM