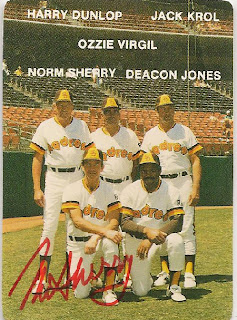 Norm Sherry never played for the Padres, he just coached them.  He had worked with Dick Williams in the Angels system and even took over the Angels for two years after Williams was fired.  He worked with Williams again for the Expos and then was the pitching coach for the Padres while Dick Williams managed them from 1982-1986.  I got Mr. Sherry to sign this through the mail.
Posted by Rod (Padrographs) at 6:13 AM

Thanks for mentioning the Mother's Cards on my blog....I would never have seen these in my neck of the woods. I found a checklist for the 1984 Padres set and it won't help this project, but since I see these sets were produced well into the 1990s, I am sure they will come in handy at some point.