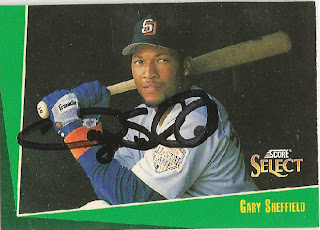 Gary Sheffield wants to play in 2011 even though he hasn't played since 2009.  He has over 500 homeruns but I don't know if he will ever be seriously considered for the Hall of Fame, because of his relationship with the media and some of the things that he has said about the game.  He played for 4 years in Milwaukee before being traded to the Padres for 3 guys you have never heard of, after a season and a half in San Diego, during which he won a batting title, the only one of nine by a Padre that wasn't won by Tony Gwynn.  During the Padres 1993 he was traded to the Marlins for future Hall of Famer Trevor Hoffman.  He then went on to play for the Dodgers, Braves, Yankees, Tigers and Mets.  I got this cool looking signed Score Select card on eBay.
Posted by Rod (Padrographs) at 6:13 AM

It is amazing how one generation of players can water-down the 500 home run mark.