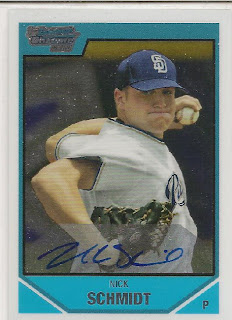 Just to play Andy Rooney for a moment.  You ever notice how one Bowman card looks like another, it's like if Mary Kate and Ashley looked the same every year.
Nick Schmidt was drafted by the Padres in 2007 and had reconstructive elbow surgery in 2008 missing the entire season.  He split 2009 between Ft. Wayne and Lake Elsinore and spent last year at Lake Elsinore.  Hopefully he will be at San Antonio this year.  I got this Bowman card on eBay.
Posted by Rod (Padrographs) at 6:13 AM