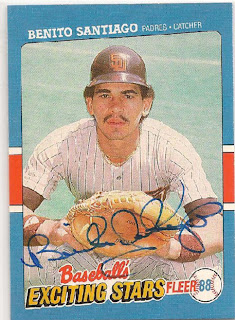 Benito Santiago was a victim of his own success in San Diego, in my opinon.  I believe that he got big headed with his success with the Padres, I used to say that the reason the Padres let him go was that his head got too big to fit in Jack Murphy Stadium.  I may be completely wrong but with some of the statements that were in the press and the toys and such, it was my opinon.  It could have been sour grapes on my part also to see such another good player leave the Padres after they got good (there are about 1,000 other examples).  Benito had a 34 game hitting streak his rookie year, which still stands as a record for catchers.  He was the 1987 Rookie of the Year, 2002 NLCS MVP (Giants), he played in 5 All Star Games, won 3 Gold Gloves and 4 Silver Slugger awards.  He didn't do well on his first appearance on the HOF ballot this year only garnering .2% of the vote, which means he will not be on the ballot next year.  I got this card from one of the many, many little boxed sets of the late '80's signed through the mail.
Posted by Rod (Padrographs) at 8:52 AM

I grew up in San Diego. It was sad to see his downward spiral after baseball. I wonder if he was doing coke while playing or if he started doing it out of depression.