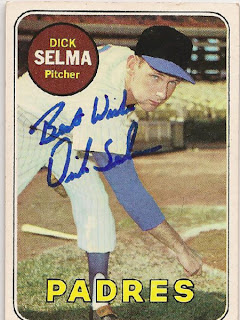 Dick Selma pitched a total of 4 games for the Padres, going 2-2.  He was drafted by the Mets in 1963, and pitched for them from 1965-1968.  Then he was drafted by the Padres in the expansion draft, pitched those four games and was traded in April to the Cubs for Frankie Libran, Joe Niekro and Gary Ross.  He then pitched for the Phillies, Angels, Cardinals and Brewers.  I got this 1969 Topps card signed through the mail.
Posted by Rod (Padrographs) at 6:13 AM