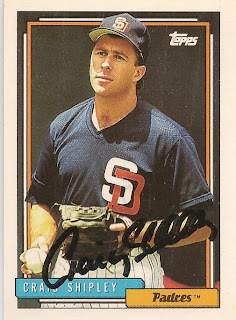 Craig Shipley is no Dick Cheney or Joe Lieberman but he is a senior vice president.  He is the senior vice president of international scouting for the Red Sox.  Shipley came from down under to play our national pastime and did for eleven years.  The Dodgers signed him as an amateur free agent in 1984,in 1986 he was traded to the Mets and then in 1988 the Padres drafted him in the minor league draft.  He played for the Padres from 1991-1994 until he was traded to the Astros as part of a multi player deal.  He then came back to the Padres after one year in Houston, played two more years in San Diego and finshed his career with the Angels.  I got this signed through the mail.
Posted by Rod (Padrographs) at 6:13 AM