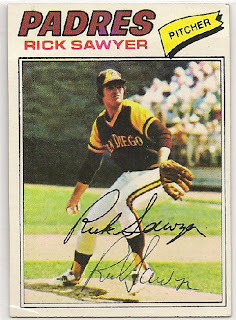 By 1977 I was avidly following the Padres, I had been to my first Padres game (during boot camp) and was close to finishing my four stint as a member of the U.S. Navy.  I still wasn't buying cards, that obsession wouldn't start for another 8 years.
Rick Sawyer was drafted by the Indians in 1968 and then traded to the Yankees in 1974 as part of a three team trade that also included the Tigers.  After two seasons with the Yankees he was traded to the Padres for artist Gene Locklear.  He played two years for the Padres.  I believe I got this signed 1977 Topps card on eBay.
Posted by Rod (Padrographs) at 6:13 AM