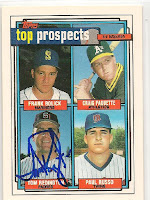 Thomas Richard Redington played in the minor leagues from 1987-1995.  He played in the Braves organization and then played in the Padres organization during 1990.  I picked up the card on eBay.  Jody Eric Reed was a Red Sox mainstay for several years, then played for the Dodgers for a year,a year for the Brew Crew, two years for San Diego and a year for the Tigers.  He is the current defensive infield coordinator for the New York Yankees.  I don't remember how I got this signature.
Posted by Rod (Padrographs) at 6:13 AM