The King of Leon 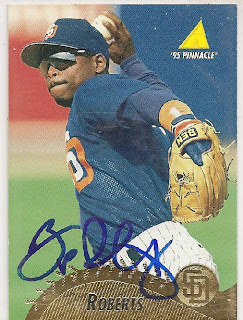 Leon Joseph Roberts is the king.  When I got out of the Navy I worked for a year as a Young Life leader at Skyline High School in Oakland, California for the 1980-1981 school year.  I got to watch some high school sports and got to see a senior, named Bip Roberts, play baseball.  A few years later I was attending a Portland Beavers game and got to see Bip play for the Las Vegas Stars, must have been 1987.  We talked about Skyline and other things and I got his '86 Topps Traded signed.    He spent all of the 1986 season in the major leagues after being chosen from the Padres in the Rule 5 draft.  He played for 12 major league seasons, 7 with the Padres along with 5 other teams, the Reds, A's, Tigers, Royals, and Indians.  He played in the 1992 All Star game, he was traded away from the Padres twice, once for Randy Myers and once for Wally Joyner.  He had a 23 game hitting streak for the Padres for the Padres at one point.  After he retired he returned to Oakland and began helping with his high school baseball as a volunteer, in 2008 he was named the head baseball coach of the Skyline High Scool Titans.  This is one of the many cards that I have signed by Bip, many in person and through the mail.  I am about 25 cards short of completing my Bip Roberts collection.
Posted by Rod (Padrographs) at 6:13 AM