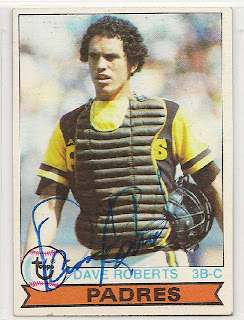 David Wayne Roberts is one of the reasons I am a Padres fan.  On June 7,1972 Dave Roberts was drafted by the Padres, Dave made his major league debut that same day.  While Dave was making his major league debut, I was attending South Eugene High School with Dave's' sister Jill.  That is when I started following the Padres, and then in 1975 I got to attend my first Padres game while I was going through Navy boot camp in San Diego.  I know Willie McCovey was playing and think Dave was also playing.  He played for the Padres through 1978, then played 2 years in Texas and a year each in Houston and Philadelphia.  I have met Dave at a couple of local card shows and he is a very nice man.  I got this signed at one of those card shows.  He was inducted into the Oregon Sports Hall of Fame in 1994.
Posted by Rod (Padrographs) at 6:13 AM

Might have asked before, but do you have any pictures with Dave Roberts?