A double dose of Bad News for Portland, part II 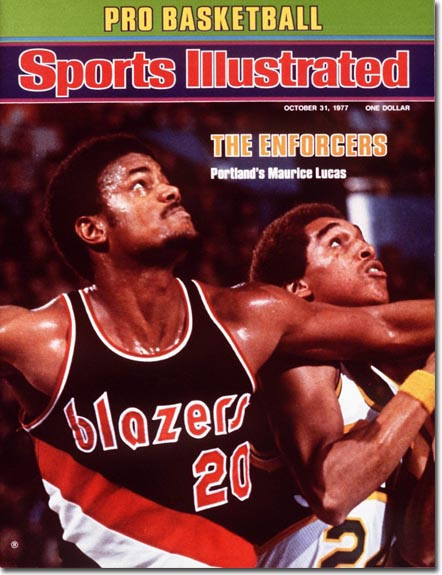 Maurice Lucas was the enforcer of the World Championship Portland Trailblazers.  He was close friends with teammate Bill Walton, so close that Luke Walton is named for Maurice.  Nate McMillan said that part of the reason he took the job as Blazers head coach was the opportunity to work with Maurice.  Between 1995-1998 I worked at Portland Sportscards and Fleer sponsored an event with Maurice.  We got to have dinner with Maurice and some people from Fleer at Old Country Kitchen.  Then we got to get things signed, I got a basketball, an 8x10 and a polaroid of us together.  He was a very nice guy.  He has been battling bladder cancer for the last year and passed away on Sunday at age 58.  I did not realize until Sunday that Maurice was only 5 years older than me.
Artie Wilson was watching baseball on TV with me, when Phil Plantier came to bat.  Artie began to laugh and said there was no way Phil was going to get a hit with a stance like that.  Plantier didn't get a hit, but as we watched the game Artie would tell me where the ball was going to be hit to and he was usually right.

Bear with me no matter how far this seems from baseball I will bring it back around to baseball.  My wife is a tailor who specializes in quilts, wedding dresses and my Hawaiian shirts.  She can make anything, I have seen her take a picture out of a magazine, pin it on her bulletin board and a year later make it without making a pattern.  Somehow she was contacted by a group of women to make them matching dresses for their job as ushers at their church.  After that she got a call from another woman asking her if she could do some work for her, her name was Dorothy Wilson.  I knew where Artie lived, thanks to Jack Smalling, and asked Ruth Ann to ask if Artie was her husband.  He was and invited me to come over when Ruth Ann did.  I went over and talked to Artie and he started telling me stories about his first baseball uniform.  He wanted the uniform even before he was on a team, so he went out and started shining shoes until he had enough money to buy the uniform.  We talked of him playing alongside Piper Davis, Cat Mays, Jackie Robinson and Satchel Paige.  He insisted that as good a ballplayer as Willie Mays was his Dad, Cat was a better ball player.  He talked with my son David about Jackie Robinson, when David was doing a report on Jackie for school.  He told him about a Negro League All Star game when in the rain, most of the players just wanted to get five innings in so they could get paid and Jackie was stealing bases in the mud.  He told me about losing part of his thumb because they worked in the steel mills in Birmingham when they weren't playing.  He squeezed a golf ball during the entire off season to strengthen his thumb so that he could make the double play throw.  He told me about touring with Satchels' All Stars.  One thing was obvious, Artie loved baseball.  He was one of the nicest guys I ever met and it was great to be able to sit and talk with him about his life, which was history to me.  I will miss being able to go over and talk with him.  Artie had been suffering from Alzheimers for the past year or so.  He also passed away on Sunday, he had just turned 90 on October 28.
Posted by Rod (Padrographs) at 6:59 PM