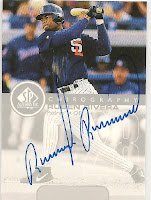 Michael R. Rivera is a catcher who played in 19 games in 2003 for the Padres.  He was taken off waivers by the ChiSox from the Padres, the Padres had gotten him in a trade from the Tigers for Gene Kingsale.  I got the Topps Total card signed through the mail.  Rubeno Rivera is Mariano Riveras' cousin, he was obtained from the Yankees for Hideki Irabu.  Ruben had been voted off the team by his Yankee teammates, after he took Derek Jeters' bat and glove and selling them to a memorabilia dealer.  I picked up the card on eBay.
Posted by Rod (Padrographs) at 6:13 AM