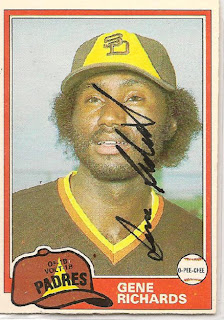 Eugene Richards, Jr.  played 7 years for the Padres and one year for the Giants.  He was drafted by the Padres in 1975 and made his major league debut in 1977 and came in third in the Rookie of the Year balloting that year.  He played through the '83 season, playing in the majority of games each year until 1983, playing at first and the outfield.  I bought this card on eBay.
Posted by Rod (Padrographs) at 6:13 AM