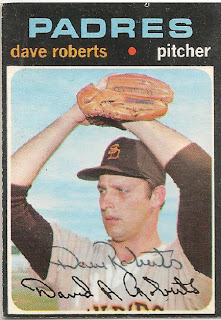 David Arthur Roberts just missed playing with David Wayne Roberts by two weeks.  He was traded to the Astros' two weeks prior to David Wayne Roberts being drafted.  He was drafted by the Phillies in 1963, then was picked up the Padres in the expansion draft.  He also played for the Tigers, Cubs, Giants, Pirates, Mariners and Mets.  He said "The way I look at it, either I'm a bum or everyone wants me."  I got the card on eBay
Posted by Rod (Padrographs) at 6:13 AM