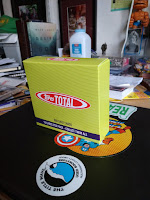 I couldn't figure out what to write about today and then it showed up in my mailbox.  I had ordered four pack of 2019 Topps TOTAL and they arrived today.  Each box held two packs of ten cards, each box also held a spongy thing to keep the packs from moving around.  The pack wrappers were nothing special just silver mylar.  As promised I received ten cards in each pack.  I 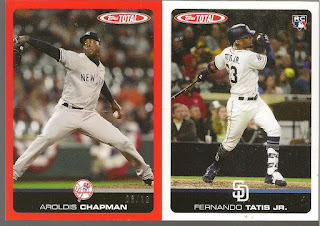 got one parallel card numbered to ten.  It was the first card in the first pack I opened. It was the Aroldis Chapman, numbered 8/10.  It is a little different on the back also, it is numbered 81A, no other card had the A designation so that must be for the of 10 cards, I wonder if the of 5 cards have a B after the number.  I got one Padres cards and it was a good one, I believe there are two other Padres in the first wave. The backs are pretty generic, the players name, position and team.  A short paragraph of between 3 and 5 lines about the player.  No card in the four packs had anything longer than five lines.  Both the front and the back of the cards are very glossy. 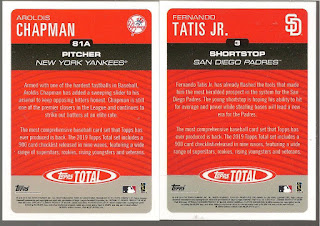 I must say that I am disappointed in this set. I have been an advocate for Total to come back for the longest time, but this is not a Total set. It is too glossy and too expensive! Plus, it would appear that their correlation stinks as well.

If you're able to trade the A's for Padres... I say go for it. If not, I'd love to give them a nice home. I won't be buying any of this product directly from Topps. Like zman40, the price point is way too expensive for my wallet. If I see discounted singles at the card show next month, I'll grab some.

By the way... Congratulations on pulling the Tatis!

That sucks about all the doubles. You would figure with an online only product that they would at least throw the customers a bone and give them better correlation or just let them pick out the teams they want.
Happy you got the Chapman parallel and the Tatis.
I might have to trade you for some Rays and Tigers from the set.

I'm interested in the Tyler O'Neill card. I should be able to help with the Frankenset.

Thanks for sharing. I don't think I've seen anyone else open these.

Sure I'll take the Dodgers even tho I've never been impressed with the look. ... I have a frankenset auto or two that hopefully will fill a slot.