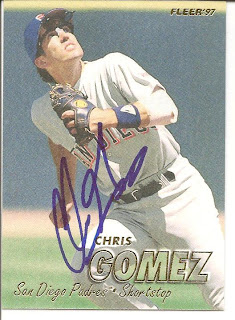 Christopher Cory Gomez had a much longer major league career than I ever imagined.  He started out as a starter with the Padres and in the end of his time in San Diego he seems to be a backup.  I got this signed through the mail years ago.  He was never high on my radar as a Padre, I remember seeing him play for Las Vegas.  He came to the Padres from the Tigers, and went to the Rays, he played for the Twins, Orioles, Toronto, Cleveland and Pittsburgh.  He retired after the 2008 season. 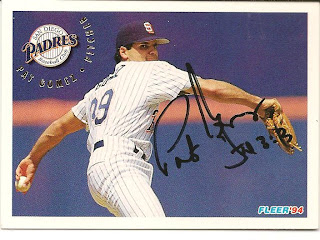 Patrick Alexander Gomez was a middle reliever for the Padres and the Giants for three seasons.  He pitched in 27 games for the Padres in 1993.  He was released by the Padres after the '93 season and signed as a free agent for the 1994 and 1995 seasons with the Giants.  I got this signed through the mail. 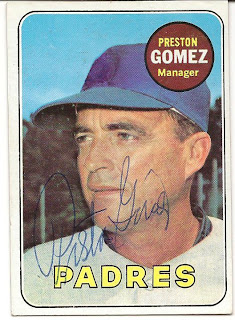 Pedro Martinez Gomez was nicknamed Preston because of his birthplace of Central Preston, Cuba.  He played for the Senators in 1944.  He was the third base coach for the Dodgers when Buzzie Bavasi became president and part owner of the Padres and named Preston manager of the team.  He managed the Padres for the first three and a half seasons.  He also managed the Astros and Cubs.  He was a special advisor to the Angels through 2008 and died in early 2009.  The Angels wore a black diamond with his name on it through the 2009 season.   I either got this through ebay or ABC Limited.

I don't think I realized that Chris Go-Go Gomez had retired. Thanks for the info Rod!