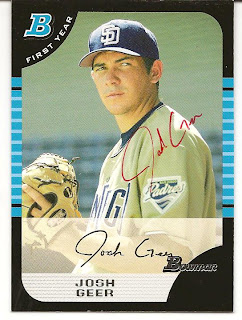 Joshua Brent Geer was drafted by the Padres in 2005 and made his major league debut in 2008.  He is not one of the aces on the staff but did start 17 games in 2009.  I got this signed through the mail a few years ago while Josh was still in the minors. 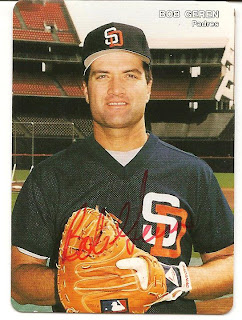 Robert Peter Geren was drafted in the first round of the 1979 draft, but did not play for the Padres until 1993.  He made his major league debut in 1988 for the New York Yankees, where he had been signed as a free agent in 1985.  Had been traded to the Cardinals in 1980 as part of a 10 player deal.  I thought that he had been playing for many years but he is only credited with 5 years in the majors. He is currently the manager of the Oakland A's.  I got this signed through the mail in 2008 while he was managing the A's. 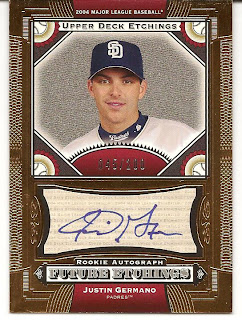 Justin William Germano broke Mark McGwires' home run record.  Ok it was the Claremont Little League home run record.  Justin was drafted by the Padres in 2000 and made his major league debut in 2004, he was traded to the Reds for Joe Randa in 2005 and pitched for the Reds in 2006 then was traded to the Phillies, but was released before he could play for them.  He then resigned with the Padres and pitched for them in 2007 and 2008, he pitched in Japan in 2009.  I got this off of ebay, but I have several autos that I got while he was playing here for the Beavers. 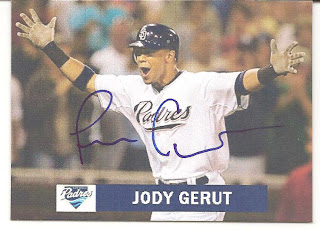 Joseph Gerut was signed by the free agent before the 2008 season and played for the Padres until May 21, 2009 when he was traded to the Milwaukie Brewers for Tony Gwynn, Jr.  I got this off of ebay from an autograph dealer who sometimes makes his own cards.

I hope you have a wonderful Christmas, and a fantastic New Year! (Without car accidents, dealing with insurance companies, but with plenty of heat... You are always welcome here in San Diego.)