Giles to go before I Giusti 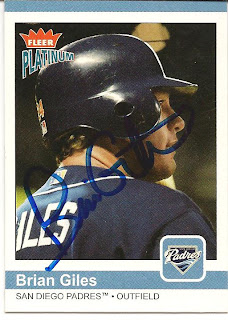 Brian Stephen Giles had a good couple of years in San Diego in 2005 and 2008 when he hit over .300.  But this last year he only hit .191 making it an easy decision for the Padres to let Giles hit the free agent market.  It will be interesting to see where he ends up, he vetoed a traded a trade to Boston earlier, citing a desire to stay close to his family.  I got this signed through the mail a few years ago. 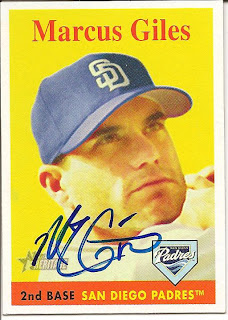 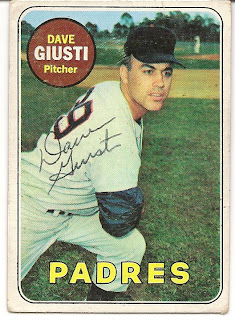 David John Giusti, Jr.  never pitched for the Padres, never even went to Spring Training with them.  The picture is at least a year old and is an Astros uniform, where Giusti played in 1968.  On October 11, 1968 Giusti was traded to the Cardinals, on October 14, 1968 the Padres claimed him in the expansion draft.  On December 3, 1968 the Padres traded him to Saint Louis, where he played in 1969 before going on to play for 7 years with the Pirates.  I got the card off of ebay several years ago.