An Afro and an ATV 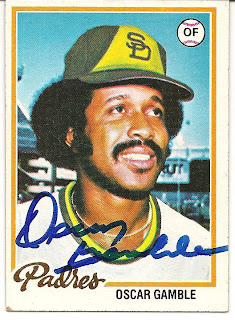 Oscar Charles Gamble played 126 games for the Padres in 1978 as shown in this wonderfully airbrushed card from 1978 Topps.  Legendary Negro League player Buck O'Neil scouted Oscar and convinced the Cubs to draft him.  Oscar is best known to baseball card collectors for some of the biggest Afros' ever seen.  He played 17 seasons in the major leagues.  I don't remember how I acquired this card. 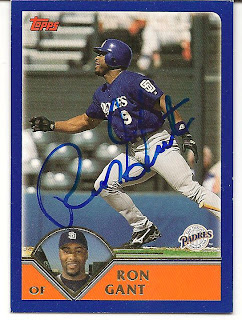 Ronald Edwin Gant played in 102 games for the Padres in 2002.  He is one of three players Goose Gossage admits to intenionally hitting.  I remember Gant best as a member of the Braves. After signing one of the biggest contracts in Braves history, he broke his leg in an ATV accident and the Braves ended up releasing him.  This card was one of my longest outstanding cards that I needed.  I think I got this through the mail after several tries.