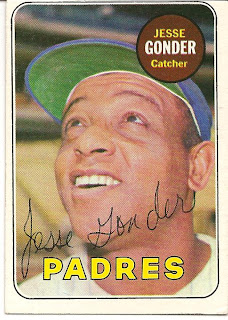 Jesse Lemar Gonder was Minor League Player of the Year in 1962 while playing in the Pacific Coast League for the San Diego Padres.  He made his major league debut in 1960 for the Yankees.  He played his final game for the Pirates in 1967, he played in the minors for the Giants in 1969.  I can't find why Topps put him on a 1969 Padres card, he wasn't chosen in the expansion draft, I can't find any evidence of him being traded to the Padres or even in there organization in 1969.  I got the signed card from eBay.