San Diego to Toronto via ATL and PIT 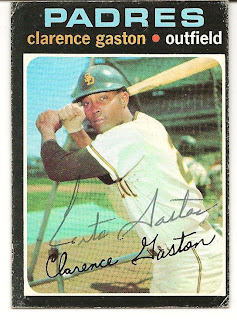 Clarence Edwin Gaston is better known as a manager than he ever was a player.  One of his roommates in the majors was Hank Aaron, who Cito credits with teaching  him to be a man, how to stand on his own.  During his eleven year career he only played for two teams, Atlanta and San Diego, unless you count playing two games with the Pirates in 1978 at the end of his career.  He played for 6 years in San Diego, and 5 years in Atlanta and never got to the World Series.  He won two World Series as manager of the Toronto Blue Jays.  I got this signed card off of ebay.