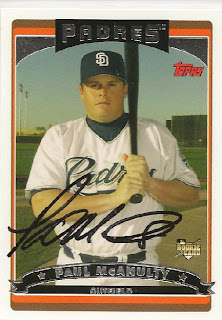 In addition to my individual autographs of Padres I also have one signed card from each year the Padres have been a major league team.  In 2006 I got Paul McAnulty to represent the team. I followed Pauls career because he was from Oxnard, CA, one of the many towns I have lived in.  He was with the Padres until after the 2008 season when he was released, he signed with the Red Sox as a free agent and played 90 games for them before being released again, he then signed with the Rockies.   Ryan from Trader Crack's successfully guessed the autograph subject and answered the bonus question.  The answer to the question, How many major leaguers are in the movie league is 4, 1 more than I knew.  They are Pete Vukovich, Steve Yeager, Bob Uecker and Willie Mueller.  I didn't know who Mueller and had to have Ryan tell me.  Here are the standings after six innings,

Ryan-Orioles-On Deck
oopowham-On Deck
spastikmoos-On Deck
dkwilson-Diamondbacks-on deck
Over at JD's Wild Cardz he is having a most impressive Olympic contest.  Although how people are going to participate in all those activities that need snow is going to be interesting, since the hills and mountains around Vancouver are still snowless.  Just click here for more information.  Go Belize!!
Posted by Rod (Padrographs) at 6:18 AM