Spot the Sig-7th Inning- Round Up 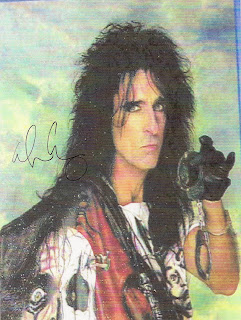 The autograph this was the Godfather of Shock Rock, Alice Cooper.  We got several of his signatures at an event that Neil Lomax sponsored here in Portland called the Quarterback Shootout to raise money for FCA and Young Life.  There were always a lot of athletes and sometimes entertainers also. This year I remember Jim McMahon, playing barefoot and drinking several cases of Coors Light, Marshall Faulk being a total loser and several other good and bad interactions.  Alice was great, he signed for everyone and talked to most people.  My son had a Sgt Peppers soundtrack and Alice remarked that it was a horrible movie, but that he got to do what a lot of people wanted to.  He got to beat up the BeeGees.  Alice is a big sports fan as evidenced by his restaurant Alice Cooperstown.  The Spastik Moos or Tim from the Great Sports Name Hall of Fame, was the first to correctly identify the autograph so he goes from being on deck to a man on second. 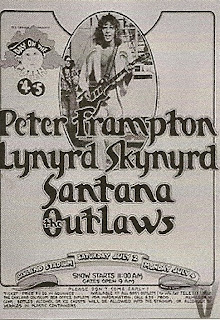 This is the first concert I remember going to on my own.  I had gone and seen BTO and some other bands at the Cow Palace at the Lane County Fairgrounds in Eugene while I was in High School.  This was one of a series called Day on the Green at the Oakland Coliseum produced by Bill Graham.  It was July 2, 1977 and there were forty thousand people there and I ran into a guy I had gone to high school with.  You could sit anywhere but the infield grass and dugouts. I spread my blanket on first base and shared it with people all afternoon.   The stage was set up in the centerfield seats, this is back in the day before centerfield was the home of luxury boxes.  I rode my 10 speed to the concert and halfway there the right crank broke off, thank goodness for toe clips, I pedaled the rest of the way with just one foot.  The Outlaws opened, I had never heard of them before, but really liked em.  Santana was up next with Leon Patillo as their lead singer, I saw Leon years later as a Christian artist at a church in Bellingham, WA.  Next up was the reason I wanted to go the concert Lynyrd Skynyrd, this was just 3 months before the fatal plane crash that spelled the end of Skynyrd.  It was awesome to watch the guitar army, particularly on FREEBIRD.  The headliner was Frampton, this was just a year or so after Frampton Comes Alive had been released, most people left before or during his set.  He overused the voice box gimmick.  BA Benny from BA Benny's Baseball Card Buffet nailed it right on the money, I paid $11.50 to go to the concert, so it reallys pains me to pay so much for concerts now.  So Benny has a man on first.