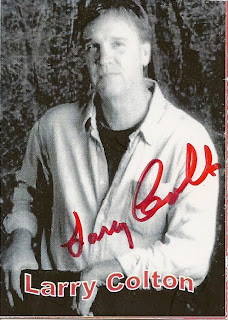 The signature was of Larry Colton, pitcher, author and founder of Wordstock h .  Larry Colton was a pitcher for the Phillies in 1968, he pitched two innings in a game at Candlestick Park, he ended up with a 4.50 ERA.  After the game he went out and managed to get in a fight and ruined his shoulder.  He played a few more years in the minors.  He was featured on a 1969 Topps Phillies Rookies Card with Don Money, even though he spent all of 1969 playing in Eugene at AAA, and in 1970 he played AAA in Tacoma for the Cubs.  After awhile he began to write for various magazines, when the Trailblazers won the NBA Championship he wrote a book about the season called "Idol Time".  He has written several books Goat Brothers, Counting Coup and should have a new book on WWII submariners coming out this year.  Larry and I have met several times and one year I got to him to speak to all 600 library employees on staff day.  Larry founded an organization called Community of Writers, which helps teachers and students in the schools with writing.  He also founded the Wordstock Book Festival, an annual book festival held at the Oregon Convention Center, which features authors from all over the world and all kinds of books.  The card is one of series that I did for authors at Wordstock in 2008.  The SpastikMoos get the double for correctly identifying the signature.  Phungo gets a walk for correctly identifying Ollie Brown as the first pick for the Padres in the expansion draft.  So here are the standings after 8 innings.

Great Bio - I knew I remembered that name from somewhere. That is quite an interesting career Colton has been involved in.