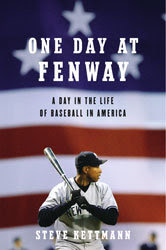 One Day at Fenway, A Day in the Life of Baseball in America by Steve Kettman; 2004; 306  pages; Atria Books, New York; 0-7434-8365-0; Checked out from Multnomah County Library, Central; 2/18-2/22
One of the greatest rivalry’s in all of baseball and maybe in sports is that between the New York Yankees and the Boston Red Sox.  Saturday,  August 23, 2003 the teams are playing at Fenway.  Steve Kettman and a team of writers travel with some of the important members of the teams and interview others.  John Henry, Theo Epstein, Spike Lee, Peter Farelly, Senator George Mitchell are some of the more well known characters, but there are other regular fans also.  Kettman puts the game in context to start off and then we start traveling to the game with the various fans, staff, umpires and players, who we follow as they prepare for the game.  Once the game starts there is an inning by inning breakdown of the game and the action surrounding the field.  This is an excellent book that will be of particular interest to Yankee and Sox fans, but any baseball fan would do well to read this.  The insight into the front office staff, the managers and players is worth the price, but the fans and less known workers (the guy in the scoreboard, the head of the grounds crew) really make it a must read.  Grade-A
Posted by Rod (Padrographs) at 6:00 AM